Peerless Cold Forge Steel Shot is a wrought carbon steel blast media whose performance is superior in durability and cleaning to that of standard SAE grades of steel shot. The wrought steel microstructure contributes to higher strength, greater fracture resistance and longer life. Peerless Cold Forge Steel Shot has a unique particle shape and has a higher specific density of 7.8g/cc versus cast steel shot and grit having an SAE minimum spec of 7g/cc, which will reduce your cleaning cycle with no increase in maintenance cost. 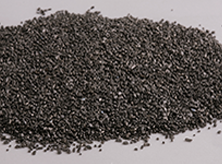 Peerless Ultra Soft Shot is designed to replace glass beads, plastic media, zinc shot and soft abrasives in non-destructive blasting and polishing applications. The hardness of Ultra Soft Shot is <30 HRC, typically between 12 and 15 HRC. Unlike other so-called soft products, Ultra Soft Shot will not work-harden once in use but remains at the same hardness throughout its useful life.